Quality, at Officine Meccaniche Zanetti, is built-in in every phase of the production process, and has always been an essential value and constant warning; certified UNI EN ISO 9001:2015 for the mechanical processing of medium and large-sized parts, quality is guaranteed by an extensive range of tools, by the know-how of our employees and by the accurate and precise implementation of the specifications provided by the customer.

A thorough attention to the customer is, therefore, a fundamental component; our “Client-Oriented” approach allows us to listen to the requests of potential customers in order to be able to offer customized and adaptable solutions, from the initial order, up to the transport to the final destination. It follows that the quality we seek relates to our products, processes, is relational and systematic, and its compliance is an integral part of our corporate culture.

Inside our plants, you can find a metrological room, entirely used for the calibration and examination of the company’s measuring instruments and various devices for non-destructive testing (NDT), carried out by our highly qualified and certified personnel at II and III levels ISO9712:2012 (former EN473).

In addition, we also have a laser tracker tool, able to carry out, exclusively on large components, the very same dimensional tests of a Coordinate Measuring Machine (CMM). This portable coordinate measuring system is extremely precise, fast, and allows you to optimize and reduce control and inspection processes by 75% and guarantees a wider measurement range. 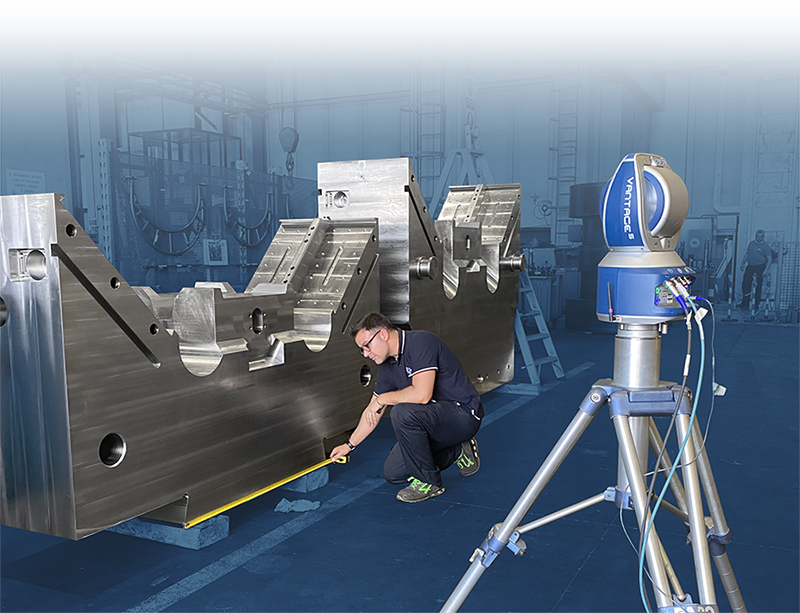 All our works come with certifications that, depending on the customer’s needs, can be of two types:

provided by the company itself
OFFICINE MECCANICHE ZANETTI

validated and provided
by an external body

Quality is a concept that embraces every step of our production process.

Linear metrological tests: these tests are used for the calibration and for the examination and control of measuring instruments and devices for non-destructive testing. Among the instruments we use, we find Primary calibration blocks made of ceramic or steel, Interferometric lenses for checking planes, NIKON dial microscope, around 700 micrometric instruments, gauges, blocks and comparators for linear testing of production and/or inspection, and a Laser Tracker VANTAGE, not only implemented in the already consolidated post-processing dimensional control phase, but also during the machining process, ensuring maximum control at all times and absolute reliability of the sequence of operations set.

These tests are carried out with the aim of acquiring the essential information necessary for the acceptability of a processing, product or more generally of an object. The retrieval of these data must only be conducted by qualified personnel, specifically trained to determine the degree of reliability of these, and the results obtained. The information and the results obtained must be reported in appropriate documents, and the level of expertise required for the control operator must be indicated as well. The non-destructive tests are conducted to verify the correspondence to the project specifications provided by the customer; the presence of an anomaly or a defect, may lead to the non-acceptance of the part, according to regulations or contract requirements. Specifically, an “anomaly” is defined as any element that make the product deviate from the design requirements, while a “defects”, is a material anomaly, resulting from a processing on the product or from metallurgical causes. Non-destructive tests include Visual Inspection (VT), Penetrating Liquids test (PT), which allows to identify cavities on the surface by spraying a liquid with high penetration properties, Ultrasonic test (UT), which, through the propagation of frequency waves higher than those perceived by the human ear inside the piece, allows to show defects that modify the reflection of the waves themselves, Magnetic Test (MT), which, by creating a magnetic field in the piece to be tested, allows to make alterations of the piece itself visible through a dust made of magnetic particles, Leak Test (LT) and Thermographic Test (TT).

These tests aim to verify this characteristic of a material, namely its resistance to plastic deformation in response to a penetrating object; the tool used is a portable or bench hardness equipment and is characterized by a pointy tip of different shapes, which will be placed and pushed against the material being tested. The purpose of this test is, therefore, to acquire information about the depth of the penetration of the durometer in order to evaluate its hardness. Of great importance are three tests, subjected to UNI 560, 562 and UNI 1955, the Brinell hardness test, Rockwell hardness test and the Vickers hardness test. In the Brinell hardness tests, a steel ball of diameter D is forced to penetrate the test piece, with a load F, allowing to measure an average diameter d, namely the diameter of the footprint left on the surface after removing the load. Brinell hardness is calculated by dividing the load F by the footprint area.

In the Rockwell hardness test, a conical-shaped diamond or a steel ball penetrates the test piece in two steps; initially an F0 load is tested, followed by an F1 load, which, when added to the previous one, achieves a total load F. After 30 seconds, the additional load is removed, allowing the resulting accretion and depth of the indentation released by the penetrating object with load F0 (e) to be read. This test is the difference between a fixed number (100 or 130 depending on whether it is a conical diamond or ball piercing) and “e”.

Finally, in the Vickers hardness test, the test piece is penetrated by a diamond penetrator of right pyramidal shape with a square base under load F, and is able to measure the diagonal d of the footprint left on its surface. The result is the quotient between the load F and the footprint area.

These tests aim to monitor and regulate the pressure inside a system, both to verify the safety and the duration of it. The tools we use for the purpose of assessing the pressure of our works are: Hydraulic control unit (max 400 bar), Electronic manometer (0÷50 and 0÷1000 bar), calibrated primary pressure Recorder “SIT” (0÷16 and 0÷400 bar).

These tests aim to check the predisposition of a conductor to collect electric charge, by reason of an electric potential concerning the environment, or subject to a variation in electric potential compared to other conductors. The geometric characteristics and the dimensions of a body determine the electrical capacity; among the instruments we use, we can find: Electromagnetic voltmeter, Electromagnetic ammeter, Magneto electric voltmeter, Amperometric Clamp 1000 A mod. R.M.S and Measuring Transformer.

These tests on surface coverings of bodies or objects assess their behavior in the event of ageing, thermal cycles, or atmospheric agents, as well as their hardness or resistance in the event of abrasion. Our chrome/paint thickness measurement devices are based on magnetic or non-magnetic ARROWELD.

During these tests, the Prussian blue pigment, also called “engineer’s blue”, is mixed with oily materials and a thin layer is applied to a metal surface, then transferred to the high spots of the workpiece. An operator then scrapes or removes the marked high spots. Prussian blue is preferable because it will not abrade the extremely precise reference surfaces as many ground pigments may. This tests aims to prove the regularity and uniformity of the workpiece’s surface.

the quality of a surface is as well guaranteed by the measurement and assessment of the roughness of a surface; irregularities that cover a surface must be in line with the tolerances indicated in the customer’s project. The compliance with these indications is important not only in terms of the appearance of the surface, but also in terms of the functionality and adhesion of the same; by ensuring this consistency, potential breakdowns and damages are avoided. Among the tools we use, we can find: Perthometer MAHR type M4Pi with printer unit and Perthometer MAHR type M2Pi with certified samples, HOMMEL Etamic W10 and MITUTOYO SJ-210 Roughness measuring instruments.
Please, note that all our raw materials, purchased from trusted and historical suppliers, are subject to the same testing process.

OMZ is ISO 9001 certified since 2000 for the precision mechanical processing of medium and large size parts for the shipbuilding, iron & steel, energy, paper production and civil engineering, issued by DNV (Det Norske Veritas), one of the most important certification authorities in the world, and by ACCREDIA, Italian accreditation body.

For us, quality has always been an essential value, both for the complexity of the processes that require constant control and monitoring, and as an indispensable tool to improve our business performance. For this reason, quality is a clear imperative, and it is achieved thanks to more than 700 highly advanced control tools, constantly verified and certified; this means real and absolute quality.

WE ARE QUALIFIED SUPPLIER FOR

For any info or quotation, please contact the sales department

Google Maps is a maps visualization service provided by Google Ireland Limited. This service is used to incorporate content of this kind on its pages.

Gravatar is an image visualisation service provided by Automattic Inc. that allows this Website to incorporate content of this kind on its pages.

Google Fonts is a service used to display font styles operated by Google Ireland Limited and serves to integrate such content into its pages.

Google Analytics is a web analytics service provided by Google Ireland Limited (“Google”). Google uses the Personal Data collected to track and examine the use of this Application, compile reports on its activities and share them with other services developed by Google.
Google may use your Personal Data to contextualize and personalize ads in its advertising network.
This Google Analytics integration anonymizes your IP address. The anonymization works by shortening the IP address of the Users within the borders of the member states of the European Union or other countries that are members of the Agreement on the European Economic Area. Only in exceptional cases, the IP address will be sent to Google's servers and shortened within the United States.